First-of-its-kind Solution for Slow App Detection to be Launched by TestFairy at Google I/O
San Francisco, May 28th, 2015: TestFairy, the provider of the video-enabled beta testing platform for mobile apps, announced today a new service, a first of its kind, allowing mobile developers to understand when their apps are slow to respond.
TestFairy will demonstrate its new service at Google I/O 2015, an annual conference featuring inspirational talks, which gives developers a chance to hear more about Google’s latest developer products. Google selected TestFairy to present at Google I/O as one of the startups participating in its Launchpad program.
“App Responsiveness is a score given to the speed-ness of apps, indicating how fast they respond to user interface (UI) events,” Explained Gil Megidish, TestFairy Co-Founder & CTO. “Every time a user touches an on-screen button or scrolls down a list, the operating system pushes events into the main thread’s queue. Before the screen updates, this message queue must clear. Very often, app developers perform processing on the same main thread. This results in slugginess of the application and frustration of the user, as the app does not respond fast enough and seems slow and unreliable. TestFairy measures how slow your main thread is and, if a piece of code blocks it from processing user-interaction events, TestFairy will alert and provide the complete stack trace of the faulty code. These bugs are hard to trace as they may be caused by a bad network connection or long items in a list.”
TestFairy is the first company to provide a solution to this problem, as part of its mobile beta testing platform.
The TestFairy platform helps mobile developers by providing videos that show exactly what happened on their apps while being tested. In addition to videos, the service provides deep analysis data such as CPU usage, memory allocations, phone signal and wifi stats, along with logs and symbolicated crash reports. By providing developers with more information regarding bugs, TestFairy helps them fix bugs faster and cut the costs of testing and development.
The service is available for iOS and Android and will be available for Windows Phone later this year.
TestFairy, founded in 2013, was selected by many developers as the perfect TestFlight replacement, allowing mobile developers to efficiently test their apps. The company recently announced full compatibility with Xamarin Insights and Adobe Air. Developers on these platforms can now experience many improvements to their mobile app testing.
For more information please visit www.testfairy.com 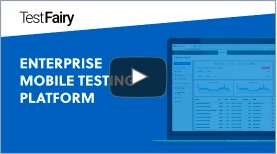